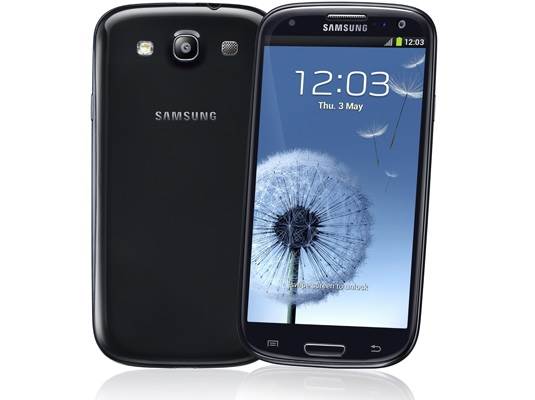 The Samsung Galaxy S III is a multi-touch, slate-format smartphone designed, developed, and marketed by Samsung Electronics that runs the Android operating system.

It has additional software features, expanded hardware, and a redesigned physique from its predecessor, the Samsung Galaxy S II. The S III employs an intelligent personal assistant (S Voice), eye-tracking ability, increased storage, and although a wireless charging option was announced, it never came to fruition. Depending on country, the 4.8-inch (120 mm) smartphone comes with different processors and RAM capacity, and 4G LTE support. The device was launched with Android 4.0.4 "Ice Cream Sandwich", and can be updated to Android 4.4 "Kit Kat". The phone's successor, the Samsung Galaxy S4, was announced on 14 March 2013 and was released the following month.

Following an 18-month development phase, Samsung unveiled the S III on 3 May 2012. The device was released in 28 European and Middle Eastern countries on 29 May 2012, before being progressively released in other major markets in June 2012. Prior to release, 9 million pre-orders were placed by more than 100 carriers globally. The S III was released by approximately 300 carriers in nearly 150 countries at the end of July 2012. More than 20 million units of the S III were sold within the first 100 days of release. Samsung has since sold more than 50 million units.

Due to overwhelming demand and a manufacturing problem with the blue version of the phone, there was an extensive shortage of the S III, especially in the United States. Nevertheless, the S III was well-received commercially and critically, with some technology commentators touting it as the "iPhone killer". In September 2012, TechRadar ranked it as the No. 1 handset in its constantly updated list of the 20 best mobile phones, while Stuff magazine likewise ranked it at No. 1 in its list of 10 best smartphones in May 2012.

The handset also won the "European Mobile Phone of 2012–13" award from the European Imaging and Sound Association, as well as T3 magazine's "Phone of the Year" award for 2012. It played a major role in boosting Samsung's record operating profit during the second quarter of 2012. As of November 2012, the Galaxy S III is part of a high-profile lawsuit between Samsung and Apple. In November 2012, research firm Strategy Analytics announced that the Galaxy S III had overtaken the Apple iPhone 4S to become the world's best-selling smartphone model in Q3 2012

At EasyService we repair any possible damage to your Samsung Galaxy S3. Ask and find out why it's worth to repair.