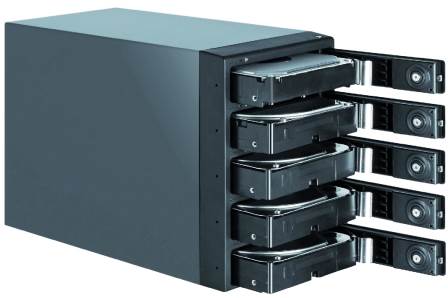 To RAID is a technology used in order trays and transfer data to gain more speed and greater safety. This is achieved with the EasyService with long term experience, using the most advanced techniques, offering solutions on all types of RAID, all types of hard drives and all data loss causes, including natural disasters, accidental deletion, file damage , wear - mechanical disk damage, etc ...

The types of RAID arrays that we do data recovery is:

- RAID-0
Often called 'striping' as the data is written and distributed across all disks. There is no absolute protection of data because if one drive crashed then collapses the entire system. The system requires the existence of at least two disks.

- RAID-1
The first level is called 'mirroring' as the data is written identically and trays. This technique is very useful in case you need data recovery, data rate of registration but is relatively slow. This system requires at least two disks.

- RAID-2
It is the only bank that does not use one of the standard techniques (striping, mirroring, and / or parity). The data is written to the technique striping while counting the odd bits of error correction codes (Hamming Codes ECC). Due to the complexity and cost of the Raid-2 is not particularly popular.

- RAID-3
This formula also uses 'stripping' mechanism with the difference being that there is a dedicated disk (parity disk) containing parity data and offer greater reliability.

- RAID-4
It uses the same technique to Raid-3 with the only difference lies in the size of the information allocated to the disks and controller access them.

-RAID-5
It is one of the most popular Raid arrays because of its low cost compared with the reliability it provides. The technique followed resembles that of Raid-4 except that instead of allocating the parity data on dedicated disk with the help of the algorithm distributes to all member disks in the array.

- RAID-6
Essentially the Raid-6 is an extension of Raid-5. Employing a second independent drive for parity data which makes the system stronger in troubleshooting, which can be met even in multiple, simultaneous loss discs.

- RAID-7
A completely different philosophy of doing things imported from the Raid-7. It uses a microprocessor and an operating system, which in real time makes the job of asynchronous controller. The performance is quite high, and the cost.

- RAID-10
It is a combination of Raid-0 and Raid-1. It requires at least four disks, two for two for striping and mirroring. It provides the same protection of data with Raid-1 but with higher costs.

- Never replace the failed disk with the disk that was part of the previous system - Array RAID ...

- If the disc makes strange noises or understand anything strange, stop it immediately and call a professional for help as directly as you can ....

- Do not use tools for recovery on the failed disk RAID ...

- Do not defragment system ..

- If the data are not accessible, do not use any software and contact us directly for the correct direction of the process ...

The engineering team of EasyService, are trained to handle all types of Server - raid controller and all operating systems.

Each case of data recovery from Raid array that comes in the laboratories of the EasyService has high priority for us as we recognize that this data are critical for our  customers.

We can recover data from hard drives that are in the array Raid any manufacturer and not limited to the following:

Despite efforts to address the problems of data loss no system is perfect and even a Raid array may collapse. In this case contact EasyService.