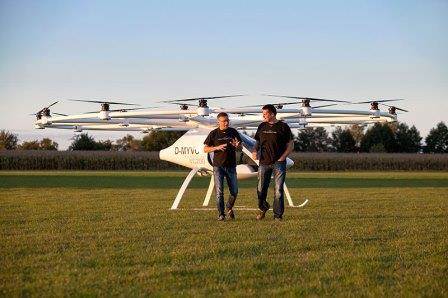 A new idea is now in Germany a starup company. The development of the idea has to do with a flying taxi – drone, the Volocopter 2X which takes off vertically and can accommodate up to 2 passengers. The Volocopter 2X on top of has a round frame which accommodates 18 propellers and allows it to fly on quietly. The helicopter-taxi moves with electricity and operated is a joystick. Furthermore the Volocopter 2X has a rapid charge mode and can recharge the battery in 40 minutes and the maximum flight time is about 17 minutes. The Volocopter 2X movable with average 69km / h flight speed exceeds the maximum speed that can be developed is 100km / h. The idea of ​​the company is based on meeting the need of a quick transfer for short distances. The distances will be limited within the urban environment and transport will be possible only for 2 people. The new 2X Volocopter rental service is not excluded to start operations in 2018 and the company would like to make feasible the possibility of independent movement in taxi – the drone. The Volocopter 2X will not only be limited to the European market but also in America!